The Nuts and Bolts of a Computer

Ever wonder what makes all the computers around us work the way they do, and what’s inside them? If so, read on!

Computers are so common nowadays that we may tend to take them for granted. They may look simple, but a lot goes into each one. Computers can range from something as small as a mobile phone to supercomputers taking up entire rooms.

Two broad categories of components make up a computer – Hardware and Software. Hardware, as the name implies, is what we can physically access. We can see, handle, assemble and disassemble hardware components. These include microchips, circuit boards, wiring, ports, monitors, keyboards and mice. Software is composed of written material, stored and transmitted in the form of electric signals through the hardware. The basic content of software is referred to as a language, which can be of different levels, ranging from human level language (composed of english words), to machine level language (composed of zeros and ones). Computer language is used to create programs such as Skype and iTunes, or an operating system such as Windows, the MAC OS and even the operating system on mobile phones such as Android. 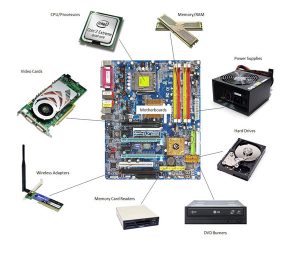 The Central Processing Unit or CPU is the brain of the computer. The CPU is composed of a set of crucial processing components, and a core electronic circuit known as the motherboard which connects all the input and output devices to the crucial CPU components. The most important CPU part is the integrated microprocessor, also known as the microchip or just chip. Without one of these, the computer cannot function. The chip takes in all data being fed into it in the form of electric signals, processes them to isolate specific signals and relays them to all the other parts of the CPU, instructing them to execute specific tasks. The tasks are determined by the software installed on the computer, whose job is to translate the electric signals into an outcome. For example, a specific set of electric signals causes the computer to print a file. Apart from the microprocessor chip, the Random Access Memory (RAM) and the Hard Disk Drive (or HDD) are two crucial components of the CPU. The RAM is in the form of one or more chips, and is able to store data while the computer is working. Larger the RAM, more the work a computer is able to do at one time. Nowadays, the typical RAM for desktop computers is in the range of 4 – 8 gigabytes. The HDD is the primary storage device of the computer. It stores everything from the operating system to all the computer files. Larger the HDD, more the files that can be stored on the computer. Typical HDD sizes of desktop computers nowadays are between 250 – 750 gigabytes.

Other than the electronic circuitry and chips, the computer’s CPU also contains basic but very important parts such as a power supply, a fan and heat sink to help keep the computer cool, and a small battery which keeps the computer’s clock going even when unplugged.

The design and construction of computers is evolving so fast, that the appearance and form of the basic parts are likely to be very different in the future. However, the basic functions of the parts and components will probably remain the same.