Are Apple computers better for graphics designers than Windows based computers?

Being a graphic designer, your computer is your most important companion. You are going to invest several hours every day interacting with this device. Creating your newest work of art, making contact with customers, sending invoices, all of this happens on this single device. For the same reason, I believe that the software installed on your device is a lot more important compared to the metal pieces put inside. This is where Macs move ahead of the PCs. The Macintosh operating system offers a user-friendly and sleek atmosphere that is useful for the purpose of graphic design. It makes it easy for you to handle the basic interactions, which ultimately improves your efficiency. This improvement in efficiency goes a long way when it comes to overcoming the everyday grind for being a graphic designer. With that said, here are some of the best reasons why graphic designers should choose Macs over PCs: 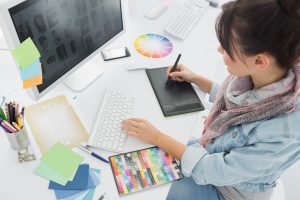 Every Apple device comes with multitude of open source coding resources and frameworks like PHP, Apache, and Ruby on rails. Linux customers that are fed up of handling their equipment problems, often choose Macintosh due to it being UNIX based.

Core animation offers a means for designers to create custom animated user interfaces by using both implicit and explicit animation models. Simply put, some really fancy and helpful features are going to show up in OS X programs. This offers designers a tool set that makes it easier for them to put into action high quality animated effects.

There are plenty of helpful resources built into the Macintosh that prove to be useful for designers when it comes to making complicated designs. This shows that OSX was built keeping creative professionals in mind. Since Apple has long been catering to the creative professional market, some of its tools seem to be created especially for designers.

Because Apple is into offering a complete solution, from hardware to the operating system to the software that is packaged in, they are able to give their users a seamless experience that is well tested. This means you will spend less time customizing the platform and more time designing.

Most designers would want to troubleshoot their computers on their own, however when deadlines have to be met it is often useful to offload the hassle of troubleshooting the system to individuals that already know the device inside and out.

Does all of this really matter?

If you would ask a diehard windows fan why people switch to Mac, he would surely suggest that the reasons are purely aesthetic. If you were to ask a web developer why he switched to Mac, he would rather not have enough reasons to support his decision. Being equally fair to Windows, in terms of raw capabilities there aren’t much differences between the two products. Without much effort, both these systems can be configured the way their users wish.

While it is true that Mac is not the right solution for everyone, graphic designers have their own reasons for switching to Mac. Nonetheless, Macs are costly and need user’s persistence and readiness to adapt his behavior to a very different user interface. Macintosh is unquestionably not the right choice for every consumer; however, it is certainly an alternative worth a consideration – especially for designers.